After reading about the exquisite wedding of Mrs. Margherita Missoni, I realized that there have been many brides (and grooms) with great style that we all really admire.

Here are my favorites:

Monroe is wearing brown suit with a white mink-collar. Unconventional, but still chic.

Grace Kelly chose gown by Helen Rose. The gown was the most expensive dress that Rose had ever made.

Pattie Boyd with George Harrison in 1966

Priscilla wore a floor-length wedding gown of her very own design. 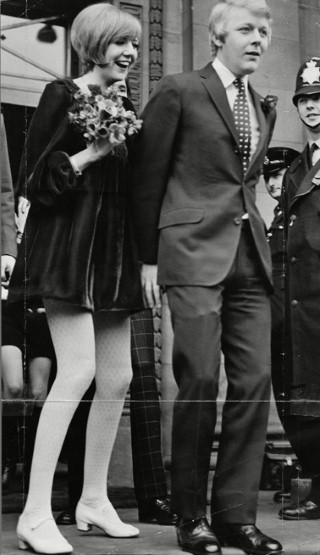 Possibly the most iconic wedding outfit ever, Bianca decided for her marriage to wear the white Le Smoking jacket by Yves Saint Laurent with a long white skirt and a large floppy hat.

Kurt Cobain and Courtney Love’s wedding in Waikiki. Courtney wore a dress that once belonged to Frances Farmer, an actress with a tragic history (Kurt wore his pyjamas)

Top model Kristen McMenamy walked up the aisle with German fashion designer Karl Lagerfeld in a dress he had designed for her.

Both in traditional black suits. David with black tie and John with white.

Margherita chose a Giambattista Valli creation made with Missoni silk and embellished style.